Reacting to the Past: Texas: Home

How Did the Alamo Get its Name?

In the early history of the fort, Spanish settlers built the Mission San Antonio de Valero, named for St. Anthony of Padua, on the banks of the San Antonio River around 1718. They also established the nearby military garrison of San Antonio de Béxar, which soon became the center of a settlement known as San Fernando de Béxar (later renamed San Antonio). The Mission San Antonio de Valero housed missionaries and their Native American converts for some 70 years until 1793, when Spanish authorities secularized the five missions located in San Antonio and distributed their lands among local residents.Beginning in the early 1800s, Spanish military troops were stationed in the abandoned chapel of the former mission. Because it stood in a grove of cottonwood trees, the soldiers called their new fort “El Alamo” after the Spanish word for cottonwood and in honor of Alamo de Parras, their hometown in Mexico.

... that Texas has belonged to six different countries? 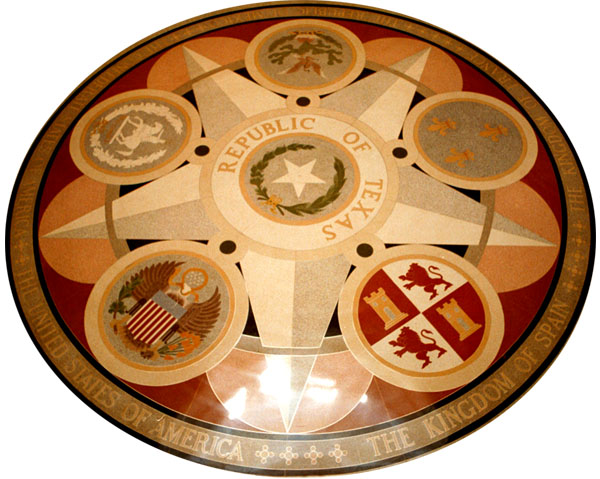 On the floor of the rotunda are seals of the six nations whose flags have flown over Texas. The seals of the United States, Mexico, France, Spain and the Confederacy surround the emblem of the Republic of Texas. This terrazzo was installed in 1936 to replace the rotunda's original flooring which featured a central octagonal design of glass blocks surrounded by geometric patterns of encaustic clay tiles. The rotunda floor was installed to commemorate Texas' Centennial of Statehood. On the walls of the rotunda are portraits of the past presidents of the Republic and governors of the State of Texas.  Visit the Texas State Preservation Board website for more information.